A UK wide campaign called UK Uncut has been working hard over the last 14 months to expose tax dodging companies like  Vodafone and Sir Philip Green‘s Topshop, among many others. It’s been estimated that Her Majesty’s Revenue & Customs (HMRC) has been going soft of their unpaid bills to the tune of £25 BILLION. After along hard slog, today the subject has made it to the top of the news.

These are not struggling companies, and in the case of Vodafone one year’s profit would comfortably clear it’s outstanding tax debt.  The government says we need to slash public spending to balance the books, so why are profit rich companies being allowed to dodge billions in tax?

There’s been a number of protests in Glasgow over the past year. To get involved and help get the money back we’re all due, keep an eye on UK Uncut’s Action List. 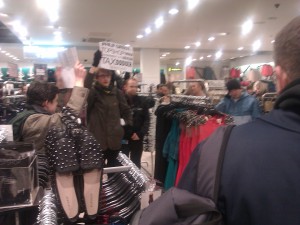 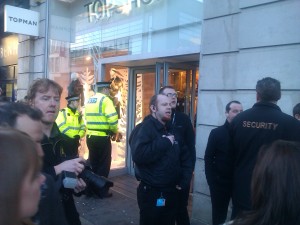 Store security seemed to mostly ignore the protesters, focusing more on the press photographers, preventing them from taking any pictures.